This vintage post card of the Nikko Inn is interesting for several reasons.

Given the high cost of color printing at beginning of the 20th century, the fact that this is printed in black-and-white indicates that it was probably a local production—not a card issued by a major publisher.

The back side confirms this because there is no publisher’s imprint, just a name, “Edward H. Sommers”, hand-stamped in the upper left corner above the handwritten note. 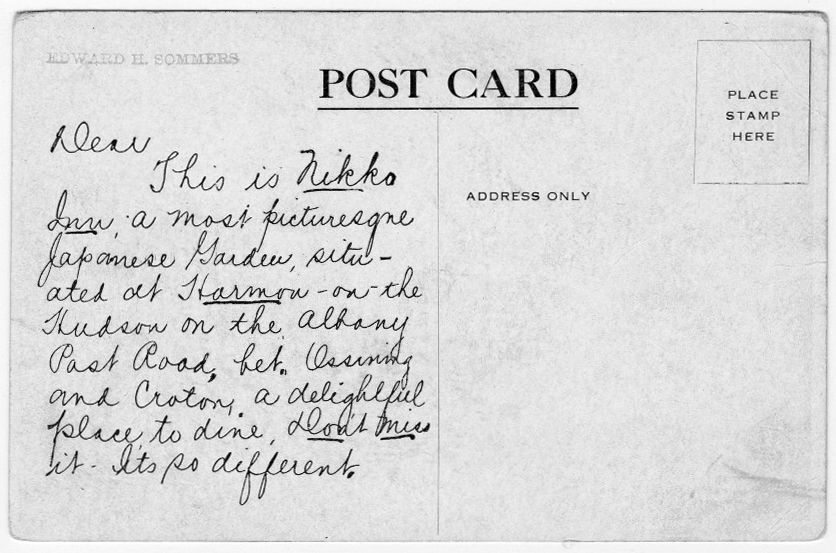 This is where it gets interesting.

Although the note appears to be handwritten, it was actually printed on the back of every copy, so all you had to do to spread the word about the Nikko Inn—the “most picturesque Japanese Garden, situated at Harmon-on-the-Hudson”—was write a name after “Dear”, address it, and put on a stamp.

Who was behind this clever bit of promotion? Probably the person whose name is stamped on the back. Edward H. Sommers was managing the Nikko Inn prior to 1917.

As we reported in a previous post, Sommers “placed Tumble In, near Peekskill, . . . on a profitable basis,” and “previously . . . had operated Nikko Inn at Harmon. . . .”

Coming soon: A different Nikko Inn proprietor gets busted for serving highballs during Prohibition and later brags about being the real author of the popular song, “I Found a Million Dollar Baby (in a Five and Ten Cent Store).”